Personal and Universal: Combining Local Traditions and Catholic Custom in Our Missionary Work

The basic human function of honoring and burying one’s dead is a personal one. It also often involves one’s family, church, and community. Local custom and traditional attitudes have their parts as well. This is the story of an elderly woman of our parish, who had just celebrated her 90th birthday when she passed away in November.

She left behind five children and several grandchildren. Her brother and sister lived over 550 miles away from Kinshasa, and they are from an area where people have to walk or canoe for substantial distances before reaching any appreciable roadways to Kinshasa.

Informed by phone, the younger sister of the deceased gave the instruction to not bury the dead in her absence or the absence of the elder brother, who lived an even further distance away. Therefore, the body of the deceased had to remain in the mortuary for nearly two weeks, allowing for the relatives’ travel before the funeral.

As is custom in Kinshasa, the family and friends of the deceased do not go to work on the day of the funeral. They instead assemble at the place where the funeral will be held, keeping what is known as a funeral watch. African tradition inspires dancing and singing during the watch, which helps to ease the trauma and the somber character of death. Those present attempt to provoke an atmosphere of gaiety, with the jokes and pleasantries that they share.

The body of the deceased is typically presented in a tent-like place, which is dressed somewhat as a chapel for the occasion. It is usually in an open space, between the houses and pavements, along a busy road. Those who have come for the watch sit on both sides of the “dressed chapel,” under the canopies that are prepared for them. 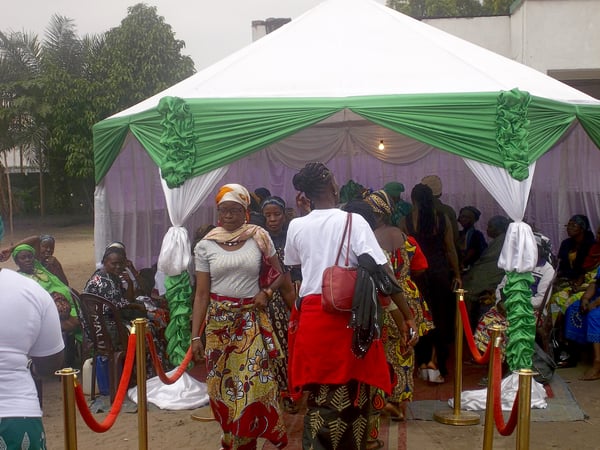 Funeral watches are very lively. In one sense, there is a certain level of elevated grief and emotion: gospel music is played loudly, and it provokes many of the women seated around the coffin to moan and cry. They will then dance to the rhythm of the music around the coffin, shaking a rose held in the hand. Soon they are joined by other women and girls, all who proudly swing around the coffin. And then the watch can turn celebratory: where folk dances greatly amuse the community.

A folk dance appreciated by the participants usually has a precise and meaningful message. There are songs that remind, according to the Creator, that we will all face death: nevertheless, each in his or her own time, and in his or her own way. Then there may be a song that provokes the particular experiences of people. There is one that retraces the journey of people from Inongo (a region in the interior country) to Kinshasa. Upon hearing that particular song, men and women from Inongo cannot resist, and those who are able will join the dancers with excitement. This kind of excitement and comradery seems to reduce the traumatizing effects of death.

One could say that the funeral gathering tradition here turns what could be gruesome and sorrowful, into somewhat of a feast instead.

In the case of our 90-year-old friend, we of course remember along with the cultural aspects of the ceremony, the fact that the she was a very devoted Catholic Christian. For this reason, her family not only organized traditional ceremonies, but also a Eucharistic celebration. The vicar was invited to celebrate Mass where the funeral watch was being held. A choir to animate this liturgy was mainly comprised of the grandchildren of the deceased. All sang with enthusiasm and joy. The Eucharist indeed gave consolation to the grieving family members and friends.

Other young people circulate with plastic containers of water, and takers are always present. These types of vendors have discovered a very good market in which to peddle their goods; in some way, it is also one less burden or detail for the family of the deceased to arrange. 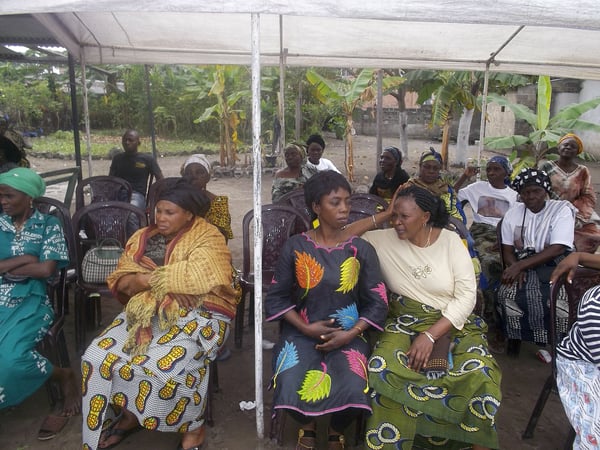 An unusual custom played out during the funeral of the elderly woman. While the crowd waited for the hearse to transport the woman for burial, a group of the decedent’s grandchildren seized the lid to the coffin, which they then hid!  The crowd was in a stir, and the agitation only increased when people began to hear the hearse sirens approaching.

Apparently, when such a thing happens, a close member of the family is then obliged to negotiate with those who have simulated the theft of the coffin cover. An arrangement is agreed upon, and the relative must then “re-purchase” the cover, paying a small sum to the young “pilferers.” In this instance, satisfied that the cover was put back on the coffin, the people were then ready to head to the cemetery.

Next came the rush of people getting into the vehicles that would accompany the hearse to the cemetery. Paradoxically, most of the people gathered did not go to the cemetery. They remained at the funeral site to wait for the others to return from the burial. It seems that the most highly anticipated portion of the affair is later: the reception following the burial.

Just as in most other places around the world, people in Kinshasa attend funerals to offer their friendship and support to the grieving family. However, in Kinshasa it is also commonplace to encounter people who attend funerals simply because it is an occasion to eat and drink without cost. There are even those who seek out funeral watches because they are homeless, and the hospitality arranged for the bereaved then becomes a makeshift refuge and food pantry for interlopers.

The uninvited are typically asked to leave without delay—albeit after at least some small refreshment is granted. Only the known relatives and friends of the deceased are meant to remain; it is supposed to be a chance to “breathe” and visit, and remember the dearly departed.

Feast After the Burial 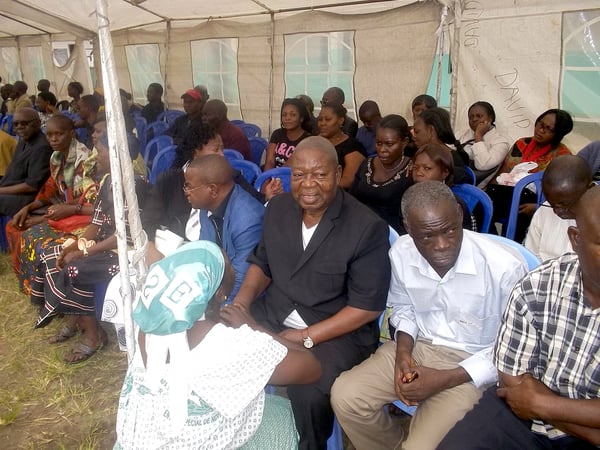 After the feast that follows the burial, most of the guests disperse. The close members of the family will remain at the home of the deceased for eight days. During this time, the women of the family continue to sit and sleep on the floor in the main room, where furniture has been removed. This practice is observed to honor the traditional belief that, during those days following burial, the deceased regularly passes close to the home: early in the morning, at noon, and in the evening. When passing, he or she needs to see that the family is mourning the death, otherwise misfortune can be visited upon the family.

I’m told that in the traditional milieu, the women would cry at the appointed moments for the decedent’s passing, indicating to the spirit that memories were still fresh in the hearts of the family, so there was no reason to bring misfortune to them.

Finally, the conclusion the funeral custom dictates that the relatives of the deceased settle any disagreements or disputes on the evening of the 8th day.  They then share a meal in honor of the departed, marking the end of the watch.  Each is then free to return home.

Our Missionary Work Helps Us See Unity and Difference

In our role as missionaries, we have indeed witnessed the many beautiful ways in which personal, traditional customs and practices are present and interwoven with the significant practices of devoted Catholics everywhere.

To say that we encounter cultural differences in our mission work is an understatement: we are called to deliver the Good News of the gospel, especially to the remote corners of the Earth, and to those who have not heard or lived it. Very often that means working in places where certain ideals and traditions may be foreign to us, but are nonetheless integral to the character of the people who we are sent to serve.

It reminds me of the catechism regarding the Profession of Faith, where we affirm that the Church is one: “I believe in one Holy, Catholic, and Apostolic Church.” In support of that statement, the Catechism of the Catholic Church* reads:

“From the beginning, this one Church has been marked by a great diversity which comes from both the variety of God's gifts and the diversity of those who receive them. Within the unity of the People of God, a multiplicity of peoples and cultures is gathered together. Among the Church’s members, there are different gifts, offices, conditions, and ways of life.”  *PartI, sec.II, ch.3, art.9, ref.814

May all the diverse cultures of the Earth continue to honor their individual traits through encountering one another in the peace and fraternity of Christ, our shared blessing and teacher.

Your spiritual and financial support allows us to help the needy and administer pastoral aid to various people and cultures around the world. Want to learn more about how you can help?