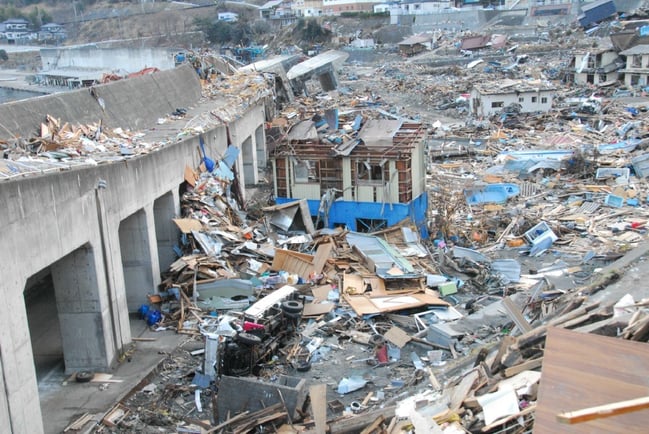 Though Japan is widely known to be an earthquake-prone country, the monster “Tohoku Earthquake” of March 11, 2011 was no run-of-the-mill earthquake. Occurring off the Pacific coast of the northeastern part of Japan, this massive magnitude 9.0 quake causing immense tsunami waves and touching off more than 80 aftershocks is thought to be the most powerful earthquake ever to hit Japan.

It is reported to be one of the five most powerful earthquakes in the world since modern record keeping began.

This earthquake triggered a tsunami that unleashed a menacing stew of debris with objects as large as ships, cars and houses coursing over the countryside and into towns, crushing buildings and everything in its path.

Eerily, fires burned in the watery mess as it flowed along. And one of the worst consequences was the crippling of Fukushima Daiichi nuclear plant, caused by the powerful explosion of a building housing a reactor.

The number of missing and dead reached upwards of 20,000. For many living in the most affected areas, it was an apocalyptic disaster. It was my first experience of a large earthquake and huge tsunami.

On that Friday (March 11th) I went biking around the imperial gardens in Tokyo, and later to the Cathedral for shopping.

I did at some point experience a sudden, strange feeling: something pressing me to go home.

I was pretty far away – about an hour and a half biking distance. I followed my instincts without knowing what was to come. I sped as quickly as I could until I reached home and, just as I set foot in my room, the earthquake began to strongly shake the building. It was so strong that I thought it would simply collapse. I was panicked and I didn’t know what to do. I had never experienced this in my life.

As I glanced out my open window, I could not believe my eyes. I was struck– shocked– by the movement of all the other buildings around me, and for a split second I thought of jumping from my third floor room. But I changed my mind and did what I thought was best: began running toward the safest place I could find outside of the building. I just ran mindlessly, at times missing the stairs and falling down, hitting my head against the walls. Finally I was outside, but even there the ground was still trembling.

After the buildings stopped shaking, Tokyo remained largely paralyzed with phone and train service halted. City streets were clogged with people trying to get home, and many spent the night in their cars because the highways were all closed.

Store shelves were stripped bare by shoppers, and thousands more spent the night in their offices. It was harder to assess the damage outside the capital because phone communications were cut. Much of the town of Kesennuma, near Miyagi, burned during the night with no apparent hope of being extinguished.

Mercifully our place was not so badly affected, but we could hardly sleep during the following weeks because of the innumerable aftershocks.

I can't count the number of times we ran from the building again and again overnight because of the aftershocks.

Even the celebration of the Eucharist was not spared the rumblings. All this trauma and fear caused the loss of my equilibrium, and trembling occurred for weeks even without the aftershocks.

Obviously the weeks following the earthquake were very traumatizing. There were empty shops without food and water, and the fear of radiation and contaminated goods was high. Many foreigners and Japanese left the Kanto region. But for us missionaries, it was too difficult to abandon people when they most needed us to be a comforting presence.

We stayed to be with and pray for the victims in the tsunami affected areas, and those who were obliged to leave their homes and belongings because of the radiation in Sendai and Fukushima.

Needless to say, there was heartbreaking grief. We were naturally moved by the predicament of the survivors, who suffered both physically and mentally. In Matsubara Church, as well as in all the other parishes, we have tried helping the victims to recover by providing basic necessities for their physical and emotional health.

After sending money, clothes, food and other immediate emergency relief, many from our church volunteered to work in the most affected areas. 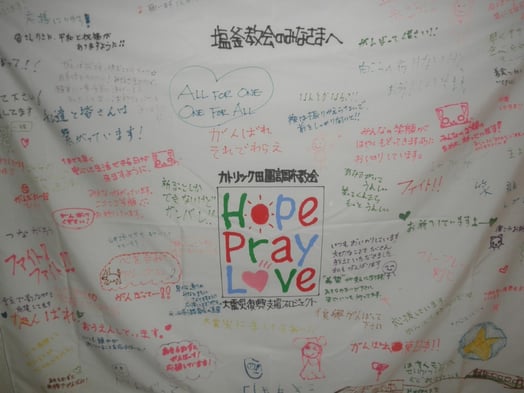 Accompanied by two parishioners, we joined 23 other volunteers to work with “Caritas Japan” for a volunteer experience of a few days in Sendai. It was an emotionally touching experience.

Material assistance aside, to stand and listen empathetically to the feelings of the survivors seemed to be very helpful to them.

These people had lost their homes and family members; they were in turmoil, questioning their future and what meaning to give to their broken lives. Emptiness, sorrow, loneliness and frustration were common, and the most acute pain was in dealing with the fact that nothing will bring back their lost ones.

They say advice is cheap, and we instead want to be generous to those who are suffering. I began to meet lonely people in the deserted areas and simply ask: “Would you like to tell me how are you feeling right now?” From there they started talking about what happened to them, how they had escaped or tried in vain to rescue someone else, and the impact of the disaster in their lives. They would share pictures of their loved ones lost, or trinkets that they found after their house was destroyed.

Looking at how the people expressed their sorrow and deepest feelings, I came to understand that indeed what they needed most was the healing touch of attention: someone willing to listen to them.

They needed comfort and consolation: not a flood of words but an open ear, and an open heart.

One year later, we pray that all the victims of the Tohoku earthquake and tsunami have found some understanding and solace for their tears. By our simple presence and through continued volunteer work we stand by the victims through their doubts and anxieties, and hope to point out a few guiding stars in the dark night.

Indeed our spiritual accompaniment is perhaps our most valuable humanitarian effort.