How I Met Mother Teresa 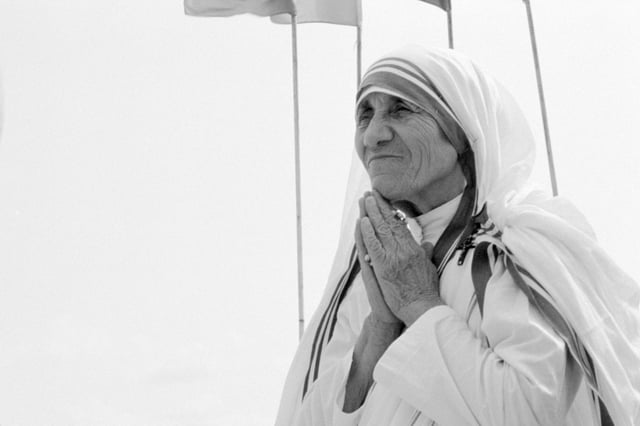 About 50 years ago, when I was the assistant parish priest at Tottori Church, I received one of those “chain letters” which were in vogue those days. Such letters covered a range of topics, but the one I received concerned commemorative stamps. It said that if I followed the directions given in the letter, I would receive letters containing 30 commemorative stamps each from various people.

Without paying attention to the letter, I threw it into my trash can. The next morning, however, something struck me. From the time she was young, my elder sister’s hobby was to collect stamps from around the world. I thought of how happy my sister would be if all went well and I was able to send her a lot of stamps. And so, I picked up the letter from the trash can, and followed its directions. After that, I forgot completely about the chain letter.

One day several months later I received a letter containing 30 stamps. The next day and the day after that, I continued to receive letters with stamps from various countries. Among them was a letter from a place called Darjeeling in Bengal, India, famous for its tea. The sender was Father Augustine Gurung. He had just become a priest and was working in a church in Darjeeling. In a little note, he wrote, “If it is alright with you, can we correspond in English?” I began writing to him. And thus, my connection with India was established.

Some years after that, I was transferred from Tottori Church to Okayama Church. I received a letter from Father Augustine saying, “There has been a major calamity in Bengal. Darjeeling too has suffered a lot of damage. Please help us.” When I discussed this with the college students and the young women in the Marian Association in the Church, they readily agreed to help and began various aid projects.

They hosted a Charity Tea, Charity Bowling Match, and even managed to hold an India Fair with the help of many people. In the midst of preparations for this India Fair, a lady brought me a book written in English. It was the first book written about Mother Teresa, Something Beautiful for God, later translated into Japanese by Father Kazuo Sawada. This was my first encounter with Mother Teresa — through this book.

A letter from Mother

As soon as the India Fair was over, I read the book. Until then, I had not even so much as heard the name of Mother Teresa. Towards the end of the book I came to know about the existence of the Co-Workers of Mother Teresa, an international group engaged in various activities. The group’s spirituality was based on the passage in St. Matthew’s gospel, which I had liked from my days in the seminary.

Although I liked the passage very much, it troubled me because I was not at all able to put these words into action. At the end of the book, the address and name of Mrs. Ann Blailde was given as the person in charge of this group, which was based in England. Although I thought of sending a letter immediately, I had the hunch that that might spiral into something quite big and I couldn’t make up my mind.

However, after a couple of weeks, I decided just to ask her if there was already a branch of the Co-Workers in Japan. A reply from Mrs. Blailde reached me straight away. She wrote that she had received letters from two or three Japanese people with the same question. She concluded the letter with, “Father, why don’t you start a Co-workers group in Japan?’ I knew that my hunch had been correct.

On October 1,1974, the Foundation Day of the Missionaries of Charity, we had the first Co-Workers’ prayer meeting in Japan with the youth group at Okayama Church. It seems that Mrs. Blaikie conveyed to Mother Teresa the news of this small beginning.

On November 6, 1978, I found in my mail a letter from Mother Teresa herself. Trembling, I opened the letter and read, “Father, please could you put up a Co-Workers’ group in Japan and be leader?” I thought to myself, “I knew that I shouldn’t have written to Mrs. Blaildel.” However, since this was the wish of Mother herself, I prayed about it and consulted several people in Osaka and Tokyo.

Two weeks later, I sent Mother my acceptance. Thus, the Japanese branch of the International Assoeiation of Co-Workers of Mother Teresa began on New Year’s day of 1979.

At the Amsterdam Airport

It was May 30, 1979, when I first met Mother Teresa in person. I was on vacation and back in Belgium when I received a phone call from an acquaintance. “I’ve heard Mother Teresa is coming to Rotterdam in the Netherlands. If you want to meet her, now is the chance.”

I took a train that day and got off at Rotterdam, intending to go to the event directly from the station when I met two sisters who belonged to the Missionaries of Charity. I had never seen sisters dressed in white sari before. I spoke to them and we exchanged some words of self introduction. They said, “We are now on our way to Amsterdam Airport because Mother’s arrival is a little delayed. Please come with us, Father.” And so I went to Amsterdam with them.

There were only five of us — the two sisters, two Co-Workers, and myself — to meet Mother at the airport. Since this was several months before Mother received the Nobel Peace Prize, she was not yet so famous. Within ten minutes of the announcement that the plane had landed, Mother appeared first in line with one worn bag as her only luggage. I remember how my heart became warm, I was moved to tears and how happy I was at seeing Mother’s smile for the first time.

After our greetings were over, one of the Co-Workers drove us for two hours on the highway to Rotterdam. In the car we first prayed with the rosary and then talked about many things, including Japan. I said, “Mother, please come to Japan.” And she replied, “Of course. If I get the chance, I would love to come.”

A few months after that, Mother won the Nobel Peace Prize and became well known. Two years later in 1981, Mother made her first visit to Japan, having been invited for a symposium on the dignity of life. I wanted to see her so much that I went to Narita Airport. Mother remembered our encounter in the Netherlands and said to me, “Father, I would appreciate if you would accompany me during my stay in Japan.” In the end, I ended up serving her as if I was her security guard. This was the case on two more occasions when she came to Japan in 1982 and 1984. Now that I come to think of it, the whole thing began with a chain letter which came when I was in Tottori, and on second thoughts I retrieved from a trash can where I had thrown it.

My last meeting with Mother

About a half a year before Mother passed away, I stayed for four to six days in Kolkata on my way to Belgium for my vacation. On my last day in Kolkata, as I went to the Missionaries of Charity Mother House as usual for the morning Mass, one of the sisters asked me, “Father, could you please celebrate mass in Mother’s room, as she can’t get up due to terrible back pain.” This has become an unforgettable memory in my life. There was nothing in the small room except for a bed and a small desk and chair. The Sisters hurriedly converted the desk into a makeshift altar where I celebrated the mass.

After mass, when I went to see Mother in bed to say goodbye, she took both of my hands and began to speak of many things. “It is all God’s doing that the works of love for the poor have spread like this throughout the world.” Over and over again, Mother repeated, “He did it. I have been only a small pen in God’s hands. He has done all the writing.” Suddenly, Mother seemed anxious and unexpectedly, she said, “Father, I may not be here so long now. Do you think everything has been alright? Will God not judge me severely? I am worried. Please pray for me.”

After a while, Mother’s usual smile returned to her face, and she said, “Father, please bless me.” Whether out of nervousness, I gave the blessing half in English and half in Japanese. I the said good bye to Mother and returned to Japan after my vacation.

Half a year later, I was appointed pastor of Tokyo’s Matsubara Church. The Church ladies’ group asked me to speak about Mother Teresa on September 5th at their first Friday meeting. Mother passed away on that day, the 5th of September.

When I look back on the past, there have been a lot of things that appeared to happen merely by chance. However, I firmly believe they were all due to His wondrous guidance: the person who forwarded a chain letter to me, my sister who was fond of collecting stamps, Father Augustine Gurung of Darjeeling, the lady who brought a book about Mother Teresa to the India Fair, an acquaintance who gave me news that Mother was coming to Rotterdam while I was in Belgium on vacation, and the two sisters in white sari whom I came across at Rotterdam station. Thanks be to God who brought all those people into my path.

Get more stories like this by subscribing to "Sent: A Blog of Catholic Missionaries." We'll send you a new story every Wednesday!

Topics: Stories from the Field