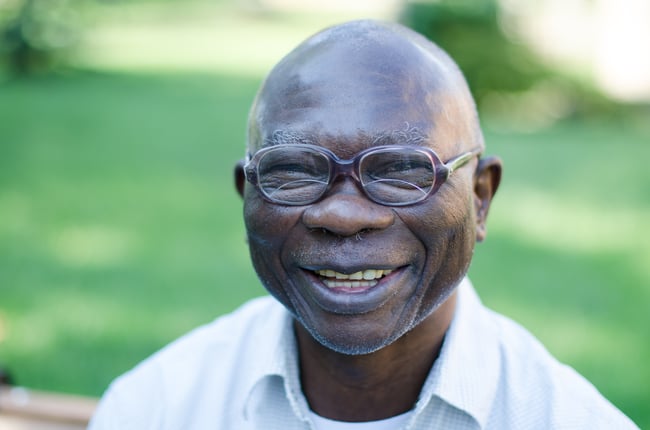 When asked the question, “What made you want to be a missionary?”, Fr. Charles Lutumba, a native of the Democratic Republic of Congo, answered with characteristic simplicity: “I was baptized two days after my birth,” he began, “ I grew up in a family which believed in God. When I was still young, I was thinking of three things: either becoming a teacher, or a doctor, or a priest.” Fr. Charles initially studied to become a teacher, but later was accepted into the CICM novitiate.

Fr. Charles initially studied to become a teacher, but later was accepted into the CICM novitiate.

At that time, his diocese in the capital of DRC only had four native priests; all of the other priests were missionaries or diocesan priests from other dioceses. Fr. Charles was asked to become a diocesan priest, but he thought, “if [the shortage of priests is] this bad in my diocese, how much harder must it be in other parts of the world that are even more remote and less Christian?”

He began to pray about pursuing missionary work, and eventually applied for and was accepted into the CICM novitiate.

Fr. Charles sees his life as a missionary through the lens of Mary’s fiat to the angel Gabriel (cf. Luke 1:48). The Mother of God let go of her own plans and trusted in the Father; missionaries have to do the same each day.

“She was ready to follow and give up everything because it was God’s will.” Case in point: Fr. Charles originally planned on going to Brazil to begin his work as a Missionhurst priest, but he was unable to obtain a visa. Instead, he was sent to Kinshasa, in his home country of the Congo.

Most of his work now is with CICM seminarians; he accompanies them as a spiritual director and mentor.

When listening to Fr. Charles share his story, you can’t help be struck by his childlike wonder in the face of the small, everyday ways that God reveals himself. “Miracles happen every day,” Fr. Charles insists, “if we are attentive, we can see them...Waking up in the morning is already a miracle, because when we go to sleep at night, we don’t know if we will be up the next day…”

In his own life, he cites the fact that nineteen years ago, he was helping young people to respond to God’s call as a formator, and now those same young people--some who are now priests and some who aren’t — welcome him with joy and share their lives with him.

“We don’t need to look for miracles; the fact that we are there, that we are alive, that we can meet and help each other, that is a miracle.”

What matters, insists Fr. Charles, is “Just to love: God and the people around you."

Rather, we must accept the people we meet in our present circumstances, because they are the ones who God has given us to love. What matters, insists Fr. Charles, is “Just to love: God and the people around you. We see [God] through his people, and if we want to grow closer to him, we must love the people we meet.”

Have you subscribed to Front Lines? Get weekly updates on missionary efforts from around the world by subscribing to our weekly newsletter.