Catholic Missionaries Share a Struggle with the People of Senegal

Life is, in a way, punctuated by our meaningful experiences. We commonly define our pivotal moments as the interspersed experiences in which we encountered trials, compassion, support, humility, loss, forgiveness, love, and other poignant emotions. We have learned the struggle of the Senegal people by sharing in the particular suffering of ceaseless flooding.

These are the “certain events” that seem to help us to learn, and truly share, ourselves and the situations of others. Our work as missionary priests is modeled on just that premise: we can only experience the lives of others through living with and among our brothers and sisters in their world—all over the world.

In the case of living and working in Senegal, there are many difficult day-to-day realities that we experience with our parishioners.

As a country, Senegal lacks many of the natural resources needed to support industry, and it relies heavily on the support and development assistance of international donations.

Large areas of the country have poor basic infrastructures (water, power, etc.), lead to a lack of stable subsistence or employment opportunities for its people.

In the suburbs of Dakar, the parishes where we are working are home to communities primarily inhabited by poor people. While in the past sufficient rainfall has been lacking in the region, for some years now the rain has actually been abundant.

This has contributed to an improvement in the agricultural prospects for our rural areas—but the newfound bounty of water has also caused severe property damage and flooding, primarily in the poorer urban quarters.

While some individuals may have the resources to prepare and adapt when natural disasters threaten, the majority of the flood victims in our communities are the very poor.

This year alone, the abundance of rain has resulted in severe flooding that can be blamed for the deaths of more than 20 people.  Our rectory was even besieged one morning, following a night of heavy downpours.

After our morning prayers we went to the dining hall for breakfast and were stunned to realize that it, the living room, and even the kitchen were inundated. We went out to see what the situation around the parish was, and found that the whole quarter was submerged in water.

We had to begin the process of removing the water from the house as quickly as possible. The rectory here is actually comprised of two buildings.

The older building is really the remains of the previous presbytery: partially demolished for the passage of a highway. This is the one that is easily affected by flooding because the foundation is low for its surroundings. As for the newer building, it was constructed following the roadwork and was built with a higher foundation, sparing it from the floods.

We typically have many daily visitors who fetch water from the parish well on the property.

And there were, in fact, many people arriving that fateful morning who were astonished not only to see that the house was flooded, but also to see the priests bailing water just as they have had to do! 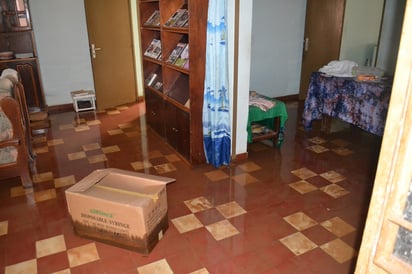 I think this scene solidified for many locals and parishioners that we can (and do) face many of the same difficulties as them: that we too are vulnerable, and capable of understanding their situations.

Our community or town is called Diamaguène: a name that signifies “peace is best.”

It is a wonderful reminder of the importance of regard and cooperation between neighbors. The situation we experienced with our own property flooding helped us to better understand the recurring pains of much of the local population.

The rainy season generally lasts about four months—from July to October. While this is typically a difficult period for the populations of our urban and suburban areas, we have to remember and be thankful for the fact that it provides the much-needed water supply for the success of farmers in the villages.

This situation confirms a customary saying here, translated as: “One man’s meat is another man’s poison.”

Around town you will commonly hear pleas for the rain to subside, while those in the villages are praying, “May God send us rain.” The CICM missionaries are trying to respond to the challenges brought about by area flooding.

Through municipal channels we have requested sandbagging of roads and other protective measures for our community, but the local and regional government agencies are struggling to respond to continuing damage and safety issues.

Even getting around the community during flooding can be treacherous; many roads and streets are impassable and people end up confined to their homes. Parish life becomes paralyzed as many of our faithful struggle with meeting their basic survival needs during these events.

On the parish property however, we have succeeded in establishing some barriers made of laterite (a clay-like soil) and sand in the courtyard. This at least allows visitors and parishioners to be able to circulate at ease on the premises, use the parish well if needed, and participate in our different parochial activities.

As for the rectory, the durable solution is to construct a second level in the new building where we will transfer all the structures of the old, vulnerable building… eventually.

In the meantime however, we continue to seek ways to accompany our brothers and sisters in Senegal. The flooding experience of our parish and home has helped us to better identify with our community’s struggles and needs; it has indeed been a pivotal and meaningful moment in our presence. 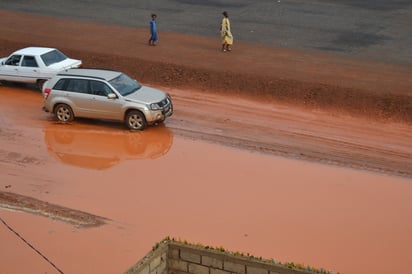 Our missionary companionship in poor or difficult areas is intended to lend consolation and deliver the Christian message of hope to all our neighbors. And if we can somehow be instruments of hope by sharing the daily pains and struggles of others, then perhaps God’s strength will lift and empower us all—together.