An Orphanage in Zambia and Young Daliso's Story

“We do not want you to be unaware, brothers, about those who have fallen asleep, so that you may not grieve like the rest, who have no hope.” (1 Thessalonians, 4:13)

With the tragic estimates of somewhere between 20-25 million people in sub-Saharan Africa infected with HIV, it is easy to understand that the epidemic has gravely impacted our society.

Millions of children are orphaned each year due to the staggering number of deaths (over one million annually) from HIV/AIDS. In the decades of the progression of this terrible disease, the children born to infected parents have become a doubly impacted segment of the population, often not only losing a parent or parents to the disease, but being infected themselves from birth. Current statistics state that some 90% of the world’s HIV-infected children are living in an orphanage in Zambia.

There are literally millions of orphan children in Zambia. They are not only traumatized by the premature death of their parents, but are also overwhelmed by the misery of becoming a burden to their extended family. For the majority of these children, the loss of their parents means abject hardship: most will lose any chance of going to school and will suffer further marginalization.

Even in cases where the child is welcomed by the extended family, there is usually little means to support him or her.

The unbearable situation for so many children in Zambia is what led us to build a home for orphans called “The Sunflower Family Center.”

Little by little, over the years, we have grown into a home that now accommodates over one hundred orphans. But in the beginning, there were just five: and Daliso was among them. 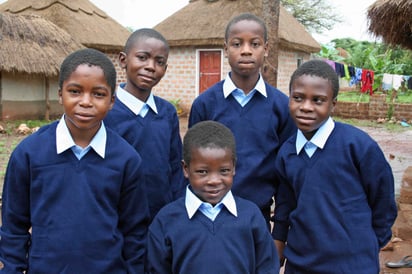 From the beginning, the message we wanted these precious children to absorb was to be happy, and to have the courage to love and live as brothers.

We want them to perceive of themselves as children of God, and to understand that if we are able to have trust and faith in the Father, we can function as a family: one big family that can be an example and a sign of the Kingdom of God for all the people who are living in the bush. This is the central message of our Sunflower Family Center.

Since his birth, Daliso did everything in his power to battle against HIV/AIDS. After his parents succumbed to the disease, he shared the daily maize with us for years. However, under a dark, moonless night sky, he eventually took flight to the house of the angels: he passed away in his grandmother's hut in the bush. 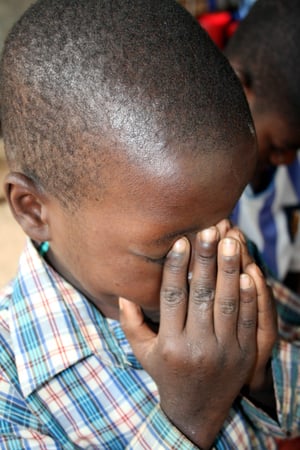 Shortly after receiving the sad news, we made our journey to Mututu, the village of Daliso's family. Somewhere around twenty-five children from our Sunflower family accompanied me.

As we grew close to the hut and his grandmother saw me coming, she began to scream:“Daliso, you Daliso! Wake up! Your daddy Peter is here to see you! ... Daliso, please! Wake up!”

But of course, Daliso remained still and silent. The mud hut with its roof covered in dry grass seemed to shiver with the painful cries of the grandmother, lying on the floor near the body of the child who was resting on a straw mat.

At that moment, I could not contain myself any longer, and I burst into tears near the poor inconsolable woman.

The room was overflowing with people, and pain flooded the atmosphere. My twenty-five young children began singing:

“Mary, mother of the poor, look at us: we are very sad. Listen to us!”

In the shade of the mango tree, I took a moment to contemplate this spectacle.  My first thoughts went to my orphans, and the story of our Sunflowers family.

From the first five boys who shared my life at the beginning of this project, already two have left this world.

This fact reflects very well the situation of AIDS in Zambia, where the average life expectancy is among the lowest in the world.

Suddenly, darkness came, and several small campfires lit up the yard. During the whole night, dozens of people remained with Daliso’s grandmother.

Early the following day, a small table and two chairs were installed not far away from the death hut. Four men entered the hut to carry the coffin out to rest on the chairs in front of the table. As in the Dominican Republic, they carried the coffin with the feet of the deceased in front.

According to their traditional belief, this practice discourages the spirit of the dead from finding its way back to the former residence to haunt the inhabitants. The small table became an altar, and the Holy Mass began.

As the drums roared, I had the feeling that Daliso's picture on top of the coffin was dancing in rhythm with the songs.

When it was time for the homily, the entire assembly looked at me, anticipating my words:

“Do you know that Daliso is my beloved son?”

“Yes! We know that,” said all the people.

“That is why it is not easy for me to speak. Only, I would like to tell you about a conversation I had with Daliso some years ago… I was speaking with him about death, and trying to prepare him. I said to him:

‘Daliso, do you know that one day I will die? And that you also will die one day?’

The child was looking at me with his big black eyes for a moment. And then he said to me:

‘This is not true! You will not die, and I will not die: when people love one another, they do not die!’

And truly we believe God is love and life! Wherever love is shining, there is no death.”

At the end of the Mass, people passed slowly in front of the coffin in order to pay homage to Daliso.  In the midst of the misery and death, life was shining like the sun at noon.

Daliso was still helping us to build a big family here, where everybody shares everything. From the house of the Father, this little Zambian prince helps us to understand that what is essential is invisible to the eye.

Indeed Daliso’s faith has shown us that “if we love one another, God remains in us, and his love is brought to perfection in us.” (1 John 4:12)

*Note: As of April 2021, we have retired our mission project in Zambia.

Can you sponsor a child in need? Your gift supports the work of our missionaries around the world!