An Education Program Run by Fr. Anaclet and the Saint Jude Clinic Could Address Infant Mortality 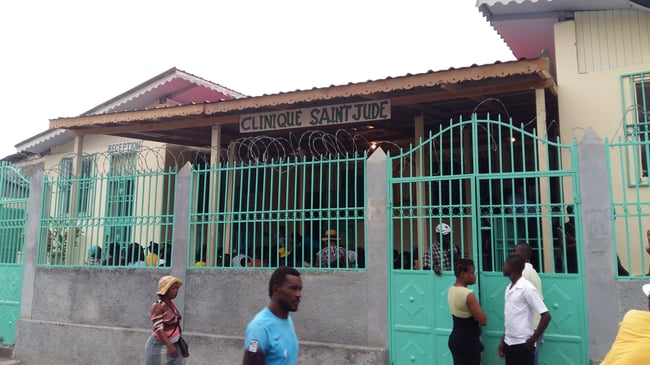 Do you remember the devastating earthquake in Haiti that happened in 2010?

It was followed by untold dislocation of hundreds of thousands of Haitians. Tent cities sprung up right away. Many areas, especially near the capital of Port-au-Prince, Haiti quickly became overpopulated, resulting in widespread food shortages, heath issues, social problems, crime, disease – in short, deeper poverty than had already existed prior to this awful natural disaster.

Today, over 7 years later, the desperate conditions in many of these overpopulated areas remain. Our Missionhurst missionaries have been there working among the poor – before, during, and since the earthquake.

Missionhurst currently runs a parish (Saint Simon and Jude Parish) in the Delmas section of Port-au-Prince. It is located right in the middle of what the United Nations has declared a “Red Zone” because of the unusually high crime rate. There, among the poor and desperate survivors of a tragic earthquake, we strive to serve the most basic needs of the people who struggle to continue.

The Work of Saint Jude Clinic

Among the many difficulties and problems our Haitian brothers and sisters face, are serious health dangers and issues. That is why within two years of the earthquake our parish opened the Saint Jude Clinic. Since 2012, this model clinic has been working directly to prevent and treat poor-hygiene related diseases (malaria and typhoid, for example), sexually transmitted diseases, malnutrition, chronic diabetes and hypertension, among other things. They have also increased initiatives of education and information related to disease prevention. This clinic has been a major blessing to the area, serving 30-40 patients per day.

This year, Father Anaclet Mpunga (parish pastor) and his team would like to launch an educational program among the population of the parish and environs (well over 10,000 persons) targeted to pregnant women. The specific infant mortality rate in this overcrowded area is not known due to the absence of the Ministry of Public Health, but it is widely known that the average life expectancy among the local population is 52 years.  Many struggle to live on no more than $5 U.S. per day.

Father Anaclet and his team have planned a formation/education program to reach as many pregnant women as possible.  He says...

“The area is overpopulated and therefore there is a tendency to promiscuity. Ladies become pregnant sometimes without any plan for it. Some do not visit a doctor as a follow up to their pregnant condition.They do not go for pre-natal visits. That is why we would like to offer, to as many as possible, formation sessions in order to make them aware of the consequences if there is no proper follow up during their pregnancy. This will enable them to avoid things that can endanger them and their babies’ lives. They need to be taught how to avoid diseases and infections that could cause deformation for their future children.  After each session, a sanitary kit will be given to them.”

How to help Fr. Anaclet and his team

Father Anaclet’s budget for this simple, but critical program, is a modest $5,500 for one year. He believes they will raise $500 locally and from very modest fees from those who can afford it. Thus, he is asking that his friends in the U.S., co-missionaries with our CICM missionaries in Port-au-Prince, do their best to raise $5,000 “for the realization of this project.”

I know that with your generous and thoughtful support (whether financial or spiritual) we can achieve this modest goal.

Again, to put it in Father Anaclet’s words:

“The fact that there are people like you out there makes our work even more vital and gives us new energies to succeed. Be sure that in all our efforts to make a difference in Haiti, you will always be remembered.”

When I read words like this from our missionaries in the field, I am deeply moved. I hope you are, too. Let’s do all we can to support Fr. Ananclet and his team, especially in this urgent project.

Thank you in advance for your generous consideration. Praying for a Blessed New Year for you and your loved ones.

If you’re interested in helping Fr. Anaclet and the Saint Jude Clinic provide education to women in Haiti, I invite you to visit our giving page!